Alex's hands have been "stuck" straight out, his hands, fingers and forearms are "flat".  Over the past several months he has been getting movement in his fingers, he can move them up and down, wiggling them.  But hasn't been able to curl them or make a fist. UNTIL, we met Jared Gough.  Jared is a local sports Massage Therapist, I heard about through a co worker (Thanks Nicole).  I left a VM for Jared, saying "I want to schedule an appointment for my son".  When he called me back, he said "tell me about your son"  I told him "my son was one of the boys that was struck by lightning outside SCHS last fall"  He got so excited and said "I have wanted to work on them since I heard about the accident, I would be honored to". 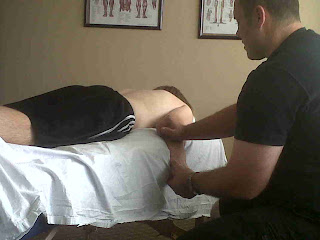 He's worked on Alex twice now and made HUGE improvements! Alex's shoulder blades use to stick out like 2 sharp chicken wings poking out of his back.  After working on Alex's muscles he was able to get his shoulders to look and feel the way they are supposed to.  Then today he worked on Alex's hands and he can curl the fingers on his right hand.  Amazing.  Jared said it felt like the muscles had just melted together, describing it like a box of crayons sitting in a car, they would hold their shape but melt together. That's what he thinks happened when the lightning went through Alex's body, giving Alex's hands and forearms the "pancaked" look.  Which makes sense, in the ER at IHC the doctors told us Alex had 3rd degree burns on 40% of his body, when we saw him, we said "he doesn't look too bad".  They said "his body is cooking from the inside out."
His left hand/fingers didn't improve as much, but that's because the left side of his body is weaker due to the "stroke" in the right side of his brain.
Now I'm bugging Alex every few minutes "curl your hand", "show me a fist"  I don't want it to stop working!
Kaleen  aka Alex's mom
Posted by kt at 8:39 PM