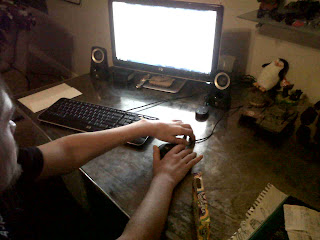 As of the weekend - Alex is back on the computer.  Thanks to Dragon and more mobility in his hands he's able to get around in cyber space pretty well.  I'm hoping that the next post comes from Alex himself.
Funny side note - Alex has never been fond of Blogging so when he regained consciousness I had to not only break the news to him that he had been struck by lightning but he had also become the topic of a Blog.  lol

All the students at ALL the High Schools have been so thoughtful, thank you. Alex got cards from HS's all over UT.  I met someone last week who was at a Hurricane HS football game, the weekend after the strike, during half time the HS had a Miracle Minute for Alex and Dane - to hear his story about the generosity, love and support during that game, even from the team from Morgan UT (which is way up north) just is shocking, it gave me goose bumps to hear about it.  All rivalry was gone, pure support was present.  Thanks to all those that donated.

Since Alex can't open drawers, his Therapists in Acute Rehab suggested we get some shelves to store Alex's clothes in.  We needed something so specific, that I wasn't able to find it at a store.  I needed them to be very sturdy, so if Alex needed to lean on it he could; wide enough so they wouldn't fall over on him, if he did lean on it; lots of cubbys to keep his clothes in; wide enough and tall enough that Alex can actually use them on his own, strengthening his independence.  We contacted the Wood shop class at SCHS and look what was made for Alex.
It turned out Beautiful - THANK YOU!!   Kaleen aka Alex's mom
Posted by kt at 8:38 PM