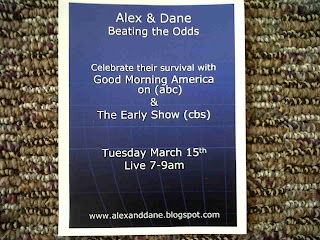 A few days after the Strike, Producers from all three Morning Shows from each Network flew out to Vegas to meet us, asking to do a story on the boys.  We told them that when the Boys were awake we would ask them what Show/Network  they wanted to be on and let them decide.  When the boys were awake and recovering they made an informed decision and decided to be on Good Morning America and The Early Show.  We are VERY honored to be welcomed by these two shows.  The Segment Producers have been amazing to us!!  They have contacted us almost every week, with true concern for the boys and for us as  families.
Watch Live on ABC and CBS Tuesday March 15th - Good Morning America & The Early Show.  Boys will appear on both shows that morning.  We don't know exactly what time they will be on, sometime between 7-9am, usually the 1st hour is current events and the second hour is human interest stories.
Thanks for all the support we have received and continue to receive.  It's still a long road ahead of us.  But its a road worth traveling.  Kaleen aka Alex's mom
Posted by kt at 11:48 PM