Since "The Strike" all forms of the media have wanted "the boys".  We as parents decided to let the boys chose what National Morning Show they would appear on.  All 3 Networks have been in contact with us, and it looks like as soon as Alex is up to traveling we will go to New York to appear live on Good Morning America (http://abcnews.go.com/GMA/).  The Early Show will air the boys from a previously taped interview that will air the same day as GMA.
However, today a crew from The Early Show is in town filming (not the boys). They are doing a Health Segment on Lightning tomorrow- informing viewers how important those first few minutes are after a strike. They are speaking with teachers, doctors and moms today.   Tune in Friday November 5th to CBS to see how you can help save a life. 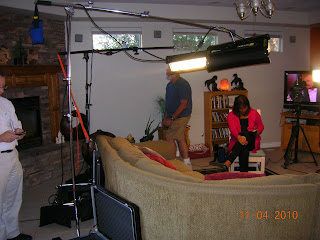 My family room turned into a TV set
The Early Show is an American television morning news talk show broadcast by CBS from New York City. The program airs from 7 to 9 a.m. Monday through Friday Eastern Time. It airs live on most affiliates in the Eastern and Central Time Zones, but is tape delayed in the Mountain and Pacific Time Zones. The Early Show features news pieces, weather, celebrity interviews and light entertainment. Having premiered on November 1, 1999, it is the youngest of the major networks' morning shows. The show airs as a division of CBS News.  From Wikipedia, the free encyclopedia
Posted by kt at 10:15 AM