The video below was taken October 14, 2010 and aired at Tuachan during the Alex and Dane Benefit Concert.  Since Alex wasn't able to be at Tuachan, UMC filmed this video of him to play in between some of the amazing acts. The money that was raised that night has helped pay for Alex's many medical bills.  Going through his bills is a full time job, my mom had been helping me with that but now that shes back home in Phoenix fighting her own health battle (bone cancer) I've taken that job on. I took this picture last month of Alex bills. 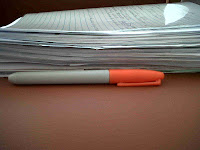 This video makes me sad yet so proud every time I watch it.  I'm sad to see the burns on Alex, the feeding tube and lack of life in him when this was filmed.  I'm proud to see how far hes come since then.  He could have given up, he could still be in a wheel chair, but he's not.  To watch this video from October, then watch the TV interviews just 5 months later..... I'm a proud mom! Alex is a tough boy! He's come a long way!
Posted by kt at 9:39 AM