Last night was a big night for Alex.  He went to see the Snow Canyon High School play Peter Pan.  Alex helped build the set and wanted to see it.  His PT and Doctor said if he worked hard they would let him leave the hospital and go to the school.  It was kind of weird for him to go back to the school.  I had been there a few times since the Strike, but this was Alex's first time back since he was whisked away in an ambulance. Once we got there, Alex enjoyed the play, the kids that preformed did a great job. 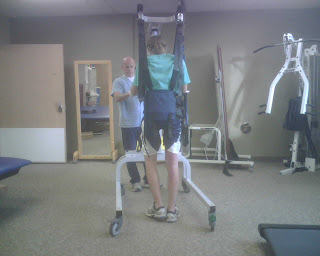 Alex is still making improvements.  They are very small but they are there.  One of his nurses that hadn't seen him for a week was amazed to see him Wednesday night, she was amazed at the progress since she saw him last.
When I say "Alex walked"  He's not walking like he use to, he's not walking like most people do. But he is up and moving a few hours a day.  Today his PT put him in a harness and he "walked" around the hallway.  He's doing better.  He's still in a lot of pain which interferes with his PT sometimes. He can move his feet and wheel himself around in his wheel chair pretty good.  Theres not a lot of new movement with his hands.  His hands are kind of "stuck" straight out.  He can move his pinkie, but once again, when I say "move" its just kind of a twitch, if you ask him to move it and you blink, you will miss the movement.  Its all baby steps.  One small step at a time, he's doing it.  He's Beating the Odds!  Kaleen aka Alex's mom
Posted by kt at 6:24 PM