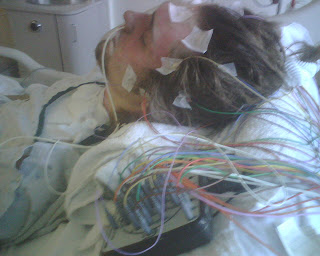 As I post this the EEG test is being done.  It will take about an hour.  Lets hope his Neurologist reads the report tonight and it is good. I'll post when I know.  He is having a good day - he got up 3 times today (with the help of others)

Its now 10pm - no news is good news.  Haven't received a report back on his test yet.  Hopefully early Saturday morning.  Today was a great day for Alex.  He remembered everything that was said to him today.  He took a long nap after his physical therapy.  He had a new PT Tech today.  He was a younger guy with a strong build.  After he helped get Alex into his chair, Alex said "Did you serve in the Military"  PTT says "Yes, the Navy"  Alex says "Can I shake your hand?"  At which time they did shake hands.  Alex honors our Soldiers and it was wonderful to witness this act of gratitude.  After the PTT left, I asked Alex how he knew he had served in our Military, he said "I could just tell".