"Peaches" "Billions of peaches, peaches for me, billions of peaches, peaches for free...." the Presidents of the
United States of America...That has been Alex's theme song as of late we will add it to his soundtrack.  His last menu order he just said "Bring me peaches".  He seems to be eating them at every meal along with his vanilla or chocolate Ensure supplemental drink.  He inhales that stuff.  Other flavors of the week include:
Sobe Stawberry Daquiri, strawberry lemonade from ClaimJumper, chocolate milk, and water so lets recap Alex's playlist/soundtrack so far

We will round things up with Motely Crue's or Carie Underwood version of Coming Home, or maybe In the End by Linkin Park.  The vote is out on this one.

He is sporting the Samurai up do tonight, and the hospital gown completes his battle dress ensemble.  He looks ready to fight his way out of the hospital bed.  He looks almost like his old self and is just as cranky.  I'm so glad to have my son back.  He is here and he is present.

When we moved from the PICU to the Burn Unit after his surgery on Tues.  Alex waited patiently for transport to take him to his new room.  They came and loaded him up on a new bed, a gurney, then we loaded all of Alex's stuff from his room on to the bed.  Well there wasn't enough room.  We had so many bags of get well cards, posters, food, balloons, DVD's etc from you.  It was a pretty funny procession from one end of the hospital to the other with his bed and balloons, and Grandma trailing guarding us.  Alex told the guy pushing him that he was thankful for him pushing him and that he would from that point on refer to him as the "Transporter"  When Alex was finally situated in the new room Alex said "Thanks Transporter". 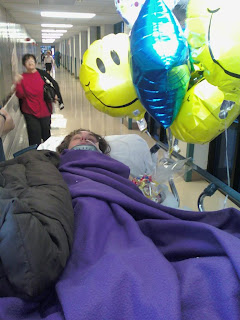 It is wonderful that Alex will close another chapter in his recovery by leaving the Burn Unit behind soon. and
returning to you in St. George.  I'm happy that he is in good enough shape to make the journey, sad that he will be farther away from me.  It was nice having him so close here in Las Vegas for three weeks.  He is back mentally.  I have been quizzing him relentlessly on Halopedia trivia.  He knows the answer to each and every question I can pose.

We have been watching a lot of Big Bang Theory and House, and it is tough for him because it hurts him to laugh right now.  It gets easier for him each day though.  I am sure we will get ROFLMAO's and lulz from him soon.   ~Arden aka Alex's Dad
Posted by kt at 2:07 PM